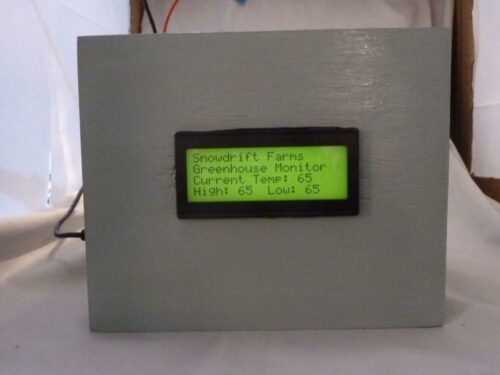 Originally I wanted to use  Xbee radios as I had tried them before and have Rob Faludi’s excellent book  Building Wireless Sensor Networks: with ZigBee, XBee, Arduino, and Processing

Instead I used JeeNodes  as I had found Xbee radios not the easiest to work with.  What you get for roughly $22 is a small Ardunio based on the Really Bare Bones Board with a radio.  Made by JeeLabs with an extensive library that can be found on Github.

Jeenodes couldn’t be easier to use.  They come pre-loaded with a send & receive sketch built in.

All you need to do is open a serial monitor and type in your node ID, radio setup  and a group ID. Plug in your second radio and type in the same setup except for a different node ID and you are good to go!

One JeeNode and a TMP36 – Temperature Sensor

will be outside in the greenhouse.
For the indoor part I’m using an old cigar box outfitted with an LCD, A green, yellow & red led and a Jeenode.

First I soldered one Jeenode kit with my Weller WLC100 soldering station.    Then I soldered the second one.  Then I put the monitor together by adding the LCD screen, an on/off button and power plug.

For the greenhouse sensor I used a tmp36 temperature sensor, the Jeenode and a battery.  Later I added a solar panel as well.

Once I had the 2 pieces talking to each other I needed to test my code.  Your refrigerator / freezer is great for this. Mine did not block the radio signal at all, but the monitor and remote sensor where only about 5 feet apart.

The green led means everything is good and working. The yellow means a problem with the sensor, possibly the battery needs recharging. If the red led comes on, then you need to turn the heat on in the greenhouse. The different statuses are reflected on the LCD screen.

See the photos below.  Make them bigger by clicking on them. 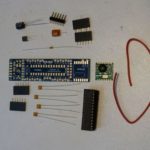 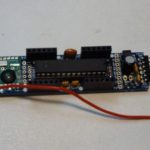 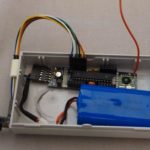 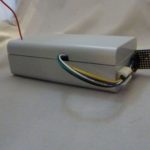 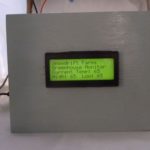 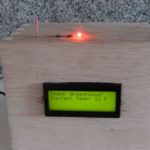